Hello and welcome to my first idea! This is not the first idea that I ever got in my life (that idea is probably something surrounding eating solid foods), but it is the first idea that I will be blogging about. To be honest, I had a blogpost ready last week. However, after asking somebody if the title was well-formatted that person said, “you should probably not post that idea, it’s actually good.” So ~ hairflip~ I did not post it! WHAT IF IT’S MY BILLION DOLLAR IDEA!..but what if this idea is my billion dollar idea! ~shifts eyes~

This pun came to me as I was doing a codeacademy class…so basically I’m going to make the next facebook.

Do I know anything about brewing beer, more specifically ale? NOPE!!! All I know is that apparently a lot of people are making their own home brew so it seems like the hip thing to do these days. There are also a lot of people who know their beers beery well. So it is a mystery as to how my beer will taste, but I’m sure you will not get ale (ill) from it.

So the product itself will look as such (excuse my very poor warping skills): 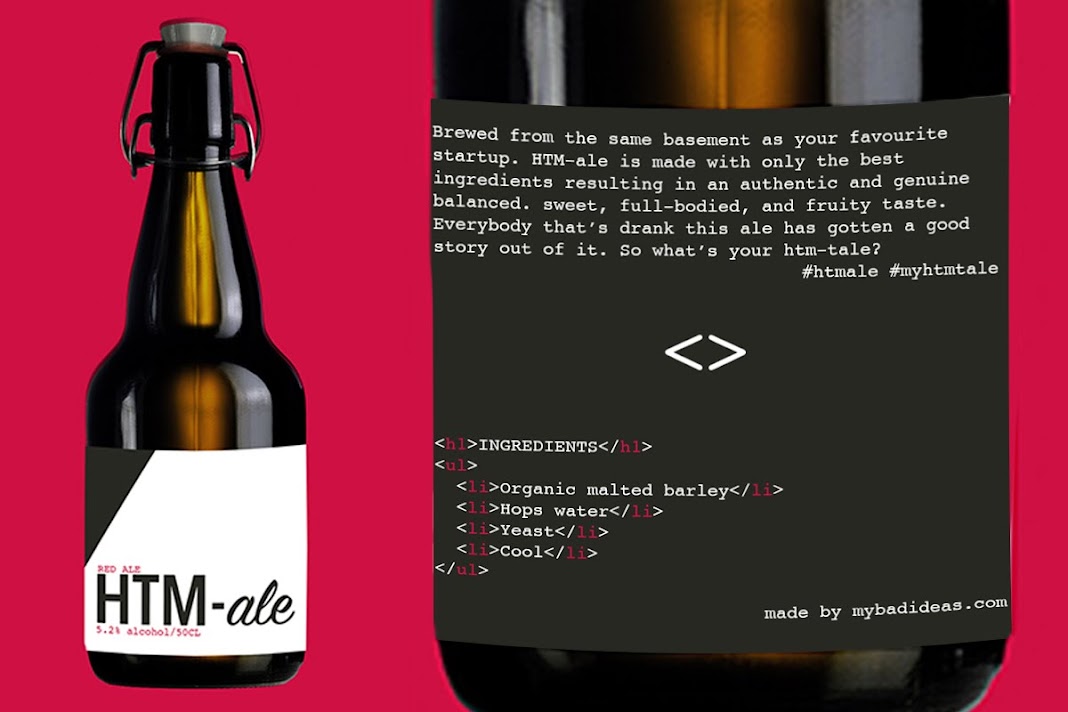 Description of the product:

Brewed from the same basement as your favourite startup. HTM-ale is made with only the best ingredients resulting in an authentic and genuine balanced, sweet, full-bodied, and fruity taste. Everybody that’s drank this ale has gotten a good story out of it. So what’s your htm-tale? #htmale #myhtmtale

As you can tell I’m a huge connoisseur in ale. JUST KIDDING! I got that description on it being sweet, full-bodied, and fruity straight from the most reliable source on the internet: wikipedia. BUT I AM a pundit with #myhtmtale. Imagine the possibilities on marketing/ad campaigns. A group of people having the time of their lives like those tinder group ads and then one of them rushes up to the camera and says, “What’s your htm-tale?” The scene then switches to that person taking a gulp of the ale very appetizingly.

You can also tell that I also googled the following:

and added a special touch ORGANIC to my ACTUAL product. I feels as though that could attract a healthy customer base, I’m not even sure if organic malted barley exists. To be quite frank I’m not quite sure what malted barley is…

Also look at that html code, I’m basically hacker-level too.

From the above, you can tell that I am very serious about the quality of content I provide to all my dear readers!

So that is the journey of my htm-ale idea!

I did share the idea with a friend today and we discovered after a quick google search that Htm Ale actually exists…it is a brewery in Huntsville, Alabama. Soooo..maybe this is actually their billion dollar idea [̲̅$̲̅(̲̅ ͡° ͜ʖ ͡°̲̅)̲̅$̲̅].